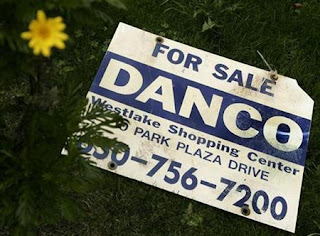 Watching the U.S. home market struggle to rebound is like listening to children in the back of a car. No, we're not there yet. The National Association of Realtors reported that ten real estate markets are "leading the nation toward a general recovery and stability of the housing sector," but myriad problems are going to weigh down the housing market for months to come.

The lingering malaise in the economy has triggered a new wave of defaults and foreclosures. After five straight quarterly drops, foreclosures nationwide shot up 14 percent from the second to third quarter this year, according to data released by Realtytrac, the foreclosure information service (see link.reuters.com/kaw94s), in October.

While RealtyTrac doesn't foresee that the latest foreclosure wave will equal the severity of the 2007-2010 pattern -- in which three million borrowers lost their homes -- it's going to slam on the brakes where areas are getting hit the hardest.

In theory, it should be a good time to buy a home. In the worst-hit areas, properties have lost more than half their value. Yet as the average 30-year mortgage rate has slipped below 4 percent, the combination of employment insecurity and unusually tight standards for lending are discouraging buyers en masse. Lenders are asking for extensive income verification and tax returns. One lender I contacted for refinancing even wanted me to get an accountant to certify that I wasn't lying to the IRS.

Here are some of the biggest roadblocks:

Even in bruised cities where price appreciation is evident, unemployment is still too high. Six out of 10 of the "top turnaround towns" listed by Realtor.com (see link.reuters.com/maw94s) for the third quarter had jobless rates above 10 percent. People can't buy homes if they're not working or soon to lose their jobs. Those cities, which include four of the largest cities in Florida, still have a long way to go to recover from the housing bust.

Although at a record low, the home mortgage rate may still be high relative to home prices. This may sound counterintuitive, but research from the Leuthold Group in their November newsletter shows that a "real" mortgage rate -- which factors in the falling market value of the home prices -- is 8 percent. Leuthold says that real cost of buying must include the 4 percent interest rate and the 3.9 percent average home prices decline over the past 12 months. That cost is still scaring away buyers.

The combination of unemployment, high housing inventory and foreclosures is hurting places where there wasn't an excessive price run-up. Realtor.com found that the largest year-over year median listing price decreases through October were in cities like Chicago, Detroit and Atlanta. This three-punch combination will continue to ravage markets where there's a sluggish economy

Possible solutions to the housing blockage range from the radical to the necessary. A group called Remortgage America (www.remortgageamerica.com/) is calling for the government to loan Americans mortgages at 1 percent to finance a new or existing residence.

Others would like to see Fannie Mae and Freddie Mac take the foreclosed homes they own and either auction them off or offer them in a huge fire sale.

The seized mortgage agencies account for up to one-third of foreclosed homes -- about 250,000. American taxpayers are pouring tens of billions into propping up these two wards of the state, which were taken over by the U.S. Treasury in late 2008. The Obama Administration has yet to announce what it wants to do with the companies. Will they be restructured, liquidated or privatized?

A third option, which may have the least impact on a battered market, is to offer foreclosed homes in rent-to-own deals. Prospective homeowners get a place to live under reasonable leases and can build equity toward a purchase.

It's estimated that some 3.4 million foreclosed homes will be on the books of banks and mortgage companies by the end of this year. As regulators, banks, mortgage companies and state attorneys general move sheepishly to unblock mortgage modifications, refinancings and resales, only one certainty prevails: The open market will not be able to properly price every property until all government restrictions are lifted on their sales and re-financing.