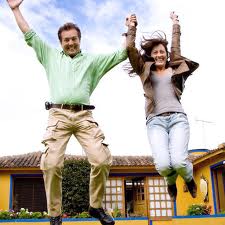 SAN JOSE, Calif. (KGO) -- Here's the best news you've heard in years about Bay Area real estate. A new report offers not just a glimmer of hope in California's housing market, but predicts a roaring comeback over the next six years. We could be poised for a dramatic comeback.


ABC7 spoke with the California director of the Economic Forecast and he's predicating a rise in home prices is going to be the convergence of a number of factors. He is suggesting that more jobs, fewer distressed properties, and those historic low interest rates will all play a role in this turnaround.

The same panel of economists who warned the California housing bubble was going to burst is now predicting homes prices are ready to rebound. "I am absolute thrilled that we are finally coming out with something positive," said Cherie Colon from Windermere Real Estate.

UCLA economists are predicting a steady climb in the median price of existing California homes. The UCLA Anderson Forecast anticipates an 11.5 percent price jump next year. The forecast calls for another 10 percent increase in 2013 and a median price of nearly $440,000 by 2017 -- that would represent a 52 and a half percent increase over today's prices.

Mike Sibilia is president of the Santa Clara County Association of Realtors. He said, "52 percent by 2017 for median price, that is aggressive, but we've seen it before, and what I like is the steady growth is what I like to see."

The National Bureau of Economic Recovery says the recession ended in June 2009, but the foreclosure crisis and high unemployment have weighed heavily on any recovery. Now, Jean Haneke is seeing signs of life. She's looking to sell her home in Morgan Hill.

"There are houses that are closing in our area, there are good sales, we've seen statistics on it, and we're looking for that sort of thing as a seller," said Haneke.

Foreclosures still count for about one third of all home sales in California and bay Area prices are especially zip code driven, but the UCLA Anderson Forecast suggests as a whole, home prices have hit bottom.

"I think locally we have already seen the start of it in some markets, but also don't expect it all to come because there are still the statistics that show that we're probably not going to be at 2006 levels again for 10 years or more," said Colon.

While the UCLA economist predict double-digit increases in terms of home prices, they say that home sales will remain relatively flat, bouncing in the 3 to 5 percent range, with the most sales activity taking place between 2013 and 2015