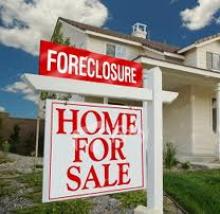 The number of financially distressed California homeowners who were dragged into the formal foreclosure process declined again last quarter, the result of turmoil and policy changes within the mortgage industry as well as shifts in the economy, a real estate information service reported.
A total of 68,239 Notices of Default (NoDs) were recorded at county recorders offices during the January-to-March period. That was down 2.2% from 69,799 for the prior quarter, and down 15.8% from 81,054 in first-quarter 2010, according to DataQuick. The San Diego firm tracks real estate trends nationally via public property records.

"Lenders and servicers have put various temporary holds on foreclosure filings while they work on procedural issues and respond to regulatory and legal challenges. It's unclear how much of last quarter's decline can be attributed to market factors and strategic decisions, and how much can be attributed to the formalities of the foreclosure process," said John Walsh, DataQuick president.

Most of the loans going into default are from the 2005-2007 period: the median origination quarter for defaulted loans is still third-quarter 2006. That has been the case for two years, indicating that weak underwriting standards peaked then. Most of the loans made in 2006 are owned and/or serviced by institutions other than those that made the loans.

California's priciest zip codes collectively saw mortgage defaults buck the market-wide trend again and rise slightly quarter-to-quarter, while their defaults fell less on a year-over-year basis than in the overall market. The state's 80 zip codes with median sale prices of $800,000 or more last quarter posted a 5.8% quarter-to-quarter increase in default notices and a 4.7% year-over-year decline.