Image by Getty Images via @daylife
The United Nations food agency (FAO) kicked off 2011 by announcing that December of 2010 saw food prices eclipse the record levels hit during the 2008 food crisis, which triggered riots in Egypt, Cameroon, and Haiti at the time. The current spike in food prices has already caused violent food riots in Algeria, Tunisia, Morocco, Yemen, and Jordan. Food inflation has already hit double digits in China, India and Brazil. It's not hard to see why when you look at how some of the major soft commodities have performed over the last 12 months:

While these price spikes are causing food and clothing prices to rise, those effects will undoubtedly be exacerbated by the simultaneous rise in energy and raw materials we have seen: 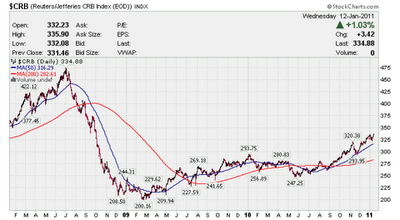 You can see by the chart that commodity prices bottomed in the spring of 2009, just about the same time the stock market regained its footing. There was a bit of a dip in the summer of 2010, but prices took off again after Fed Chairman Ben Bernanke's August of 2010 announcement that QE2 was on the way. Prices have continued higher since then, with the Fed officially announcing QE2 in November of 2010.

It would be easy to blame the food riots in Africa on the Fed's quantitative easing policy. To be clear, it probably has been a factor in the rise of commodities, and asset prices in general. The only asset classes that haven't been boosted are those we really want to rise, such as bonds and U.S. housing prices. Still, there are many other factors that are contributing to food price spikes:

•Russian Wheat: Drought in the summer of 2010 damaged the Russian wheat crop.
•Canadian Grains: Too much rain last spring and summer in the prairie provinces led to lower quality crops and decreased output.
•U.S. Crops: The recently released U.S crop report estimated that corn and soy bean output will be lower than expected.
•Australian Floods: The horrific flooding in Australia has damaged many key crops, including wheat. Food prices have been soaring in Australia, with the price of tomatoes rising 20% in one week.
•Argentinian Drought: Argentina, a major soy bean producer, has been experiencing dry conditions due to La Niña that could put a serious damper on output.
•Brazilian Floods: Deadly flooding and mudslides in Brazil have also damaged crops.
•Economic Recovery: The recent improvement in economic data has led to speculation that commodity demand will rise, further fueling price appreciation.

While Mr. Bernanke's QE2 program might be inflationary, or even hyperinflationary, you can see that there are plenty of other reasons for commodity prices to be rising. Weather has been a huge factor, and, according to John Mauldin's sources, volcanic activity in Russia's Kamchatka Peninsula may continue to contribute to exaggerated weather patterns, commodity volatility and food price inflation a while longer.

The 2008 Food Crisis
If you look at the left side of the chart above, you'll see the most recent commodity price peak in the summer of 2008. You'll recall that, by that time, the cracks in the U.S. housing and stock markets were already showing, but that commodity prices continued to rise - until they stopped. Remember $140 oil? Do you also recall how it proceeded to fall to $35 in just 6 months? Now the price of oil is already back at $90.

Back in the summer of 2008, as commodity prices were peaking, we saw hoarding of food products like rice, and riots across several countries. But all of a sudden, those types of headlines disappeared. Did the food crisis disappear? Addison Wiggin of The Daily Reckoning, writing about The Food Shock of 2011, thinks not. Still, the riot headlines were replaced by financial crisis/commodity crash headlines for a while.

Of course, the financial crisis caused a collapse in all asset prices, especially commodity prices. That brought down the price of many agricultural commodities as well, relieving some of the pressure on food inflation. But once the market recovery took off in March of 2009, commodities led the way and have once again outperformed many other asset classes - nice for investors, but not so great for poor people who need to feed their families.

The 2011 Food Crisis
If you've been to the grocery store over the past year, you know that food prices have been rising. Personally, our grocery budget increased 10% in 2010 and I added another 6% for 2011. I may have to increase that further in light of the recent acceleration in food costs. How long will this food price spike last and how will it end? Of course, no one knows for sure. There are numerous variables that could affect the course of events:

•Supply Problems: If weather-related supply problems continue, prices will keep rising and those least able to afford it will be hurt the most.
•Financial Influences: As central bankers continue to stoke asset price inflation with easy monetary policy, emerging market economies may be forced to raise rates in order to fight inflation. On the other hand, if another global financial crisis erupts, that would likely send all commodity prices plummeting.
•Demand Acceleration: Increased demand coming from the emerging middle class in developing nations means more mouths to feed with fewer, more expensive food supplies. In addition, our decision to use food to fuel our vehicles isn't looking like such a great idea at the moment. Most folks would rather feed their kids than their car.

Recently, we've been blessed with years of record crop output, so we've been able to meet the increasing demand coming from the growing middle class in developing nations. Analysts like Don Coxe, however, have been warning for years that it wouldn't take much of a disruption for our luck to run out, leaving us to deal with food shortages, price spikes, and the resulting civil unrest. Swings in the above factors one way or another will determine how long the food crisis lasts and how (or if) it will ultimately resolve itself.

Email ThisBlogThis!Share to TwitterShare to FacebookShare to Pinterest
Labels: Inflation