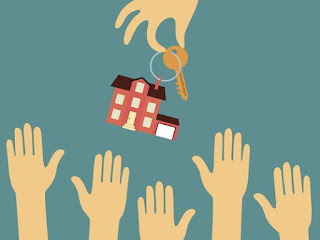 Wow, it sure did get hot fast this year! Summer has barely unfurled, but the residential real estate market is already delivering the most blistering June in a decade, according to new data on inventory and user activity on realtor.com®. Homes for sale in June are moving off the market 2% more quickly than last year as prices continue to hit new record highs.
However, there were signs of a slight—we’ll repeat, a slight—slowdown in a handful of the nation’s hottest markets.
“In June, for the first time that I can recall, the hottest real estate markets saw inventory movement slow down, while the rest of the country saw inventory speed up,” says Jonathan Smoke, chief economist of realtor.com. “We’ve essentially seen how low the age of inventory can go.”

“It’s like saying the A students had their grades slip by a point, but everyone else’s grades moved up,” he says.
Smoke’s team projects that the median age of inventory nationwide for the full month of June will be 65 days—2% less than June 2015 but the same as May. One-third of the 300 medium to large markets surveyed saw a month-over-month decline in the days that homes spent on market—some of them with a percentage decline into the double digits. 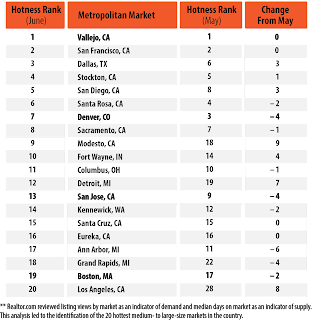 The hottest markets, identified by the team as those with the most views per listing and the quickest inventory movement, had homes selling 20 to 38 days faster than the rest of the U.S. The median age in the hottest markets increased by an average of 1 day from May.
Continuing this spring’s trend, pent-up demand from buyers who weren’t able to purchase a home last year, combined with low inventory, pushed up prices and got homes to sell quickly. Very quickly.
For-sale housing inventory is increasing on a monthly basis as is typical of the season, but total inventory remains lower than one year ago. An estimated 525,000 new listings are expected to come onto the market by the end of the month—a 3% increase over May—but that number will fall short of quenching existing demand—as evidenced by the higher prices. Compared with June 2015, listing inventory fell 5%.
Meanwhile, the median home list price was $252,000, 8% higher than one year ago and 1% higher than last month. However, much of the effect of higher prices is being offset by mortgage rates that are the lowest we’ve seen in three years, Smoke notes.
This month’s hottest markets list is (again!) dominated by California, but it’s sharing the spotlight with eight other states represented (Texas, Colorado, Indiana, Ohio, Michigan, Washington, Massachusetts, and New Hampshire). Dallas and San Diego joined the top five club, and Grand Rapids, MI, and Los Angeles returned to the top 10. With Grand Rapids, Michigan has three markets in the top 20. These markets comprise the greater metropolitan area, so Dallas also includes Fort Worth and Arlington, and Detroit includes Warren and Dearborn.
Seasonality is definitely a factor in these rankings, Smoke says.
“This is a peak time for people to be buying vacation homes in Michigan, because the weather is perfect. California markets tend to be fairly consistent—we don’t see huge changes.”