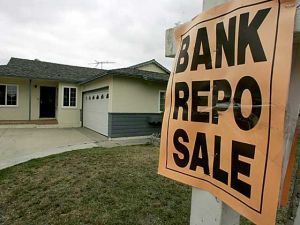 In another positive sign for the housing market, the nation's so-called shadow inventory of properties in the foreclosure pipeline fell by more than 10 percent in July from the same period a year before, CoreLogic reported Tuesday. The tracking firm in Irvine, Calif., said the number of housing units in jeopardy of foreclosure -- or that lenders have repossessed but not yet listed for sale -- dropped to 2.3 million this July from 2.6 million a year earlier.

"This is yet another hopeful sign that the housing market is slowly healing," said Anand Nallathambi, president and CEO of CoreLogic. The report should be welcome news for homeowners worried that a wave of foreclosure sales might further depress housing values.

The real estate market generally has been on the path toward recovery this year, with home prices pressed upward by the low inventory of homes for sale and by record-low 30-year mortgage rates, now below 4 percent. Experts have pointed to the shadow inventory as a potential threat to the fledgling upturn. Large numbers of foreclosed homes hitting the market could drive prices down.

The improving economy and alternatives to foreclosure, including short sales and loan modifications, have helped prevent homes from becoming part of the shadow inventory. CoreLogic s calculates the shadow inventory by adding the number of homes in foreclosure and those that are bank-owned but not yet for sale. Homes where owners are 90 days or more past due on their payments also are included.


All told, the shadow inventory in the United States was worth about $382 billion as of July, the firm estimated. That's down from $397 billion a year ago, it said. Forty-five percent of all distressed properties are in five states: California, Florida, Illinois, New York and New Jersey, CoreLogic reported