The Rise in Real Estate Is Sustainable

The cover story for the September 10th weekly magazine Barron's is on the recent surge in real estate and how the rise in property prices is no fluke. In the article by Jonathan R. Laing titled "Happy at Last," readers are given a cautiously optimistic assessment of what has already been a well established trend in the real estate market. A distinction in this article is the confidence with which many professionals believe that the current rise in real estate is sustainable for the foreseeable future.

We agree that real estate will have a sustainable trajectory upward as we outlined in our December 10, 2010 article titled "Real Estate: The Verdict is In". We believe that the clear reversal of the indicators that we discussed at the end of 2010 has proven that the real estate market has bottomed. The following is a review of the indicators that we track that have definitively shown that the direction is up.

As can be seen in the chart below, U.S. housing starts bottomed in January 2009 and started to base over the next 2 years. Two months after our December 2010 article, housing starts began to increase at a healthy pace. 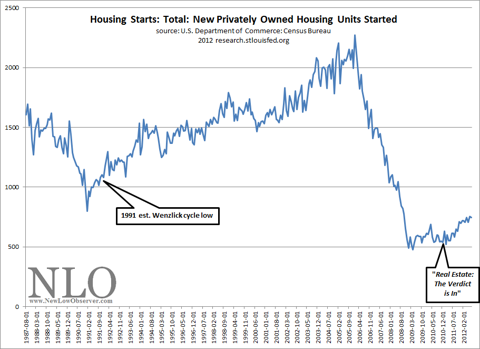 The broad basing pattern in U.S. housing starts and the relatively mild increase, as compared to the 1991 bottom, seems to indicate a more realistic view on expectations for real estate going forward.

The next chart that we find useful for determining the direction of the real estate market is the real estate loans at all commercial banks. When we published our December 2010 article, we said that the bottom had occurred in April 2010. In fact, the actual bottom took place in April 2011 as shown below. 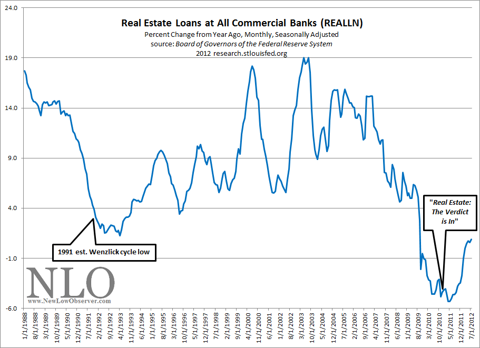 The real estate market cannot thrive in an environment where lenders are unwilling to lend. Tracking the real estate loans by banks is instructive as to what the direction might be. Our assessment of this indication suggested that on a relative basis, the declining trend was at, or near, an end. The dramatic increase in lending since early 2011 has helped push select real estate markets higher.

Much of the research analysis that we do on the topic of real estate is based on the work of Roy Wenzlick. If there ever was a scientifically accurate approach to analyzing the real estate market, Roy Wenzlick perfected it. Anyone who read his newsletter, The Real Estate Analyst (published from 1932-1974), would have thought that Wenzlick was strictly a statistician. However, while Wenzlick was a compiler of significant amounts of data on real estate, he also believed that the market price for properties ran on a clearly defined cycle. On each chart, we have indicated Wenzlick's last estimated low for real estate based on that cycle.

The chart below illustrates the importance of considering Wenzlick's estimate of the real estate cycle because it isn't the rise that we're interested in as much as when the next decline begins and when the bottom might occur. 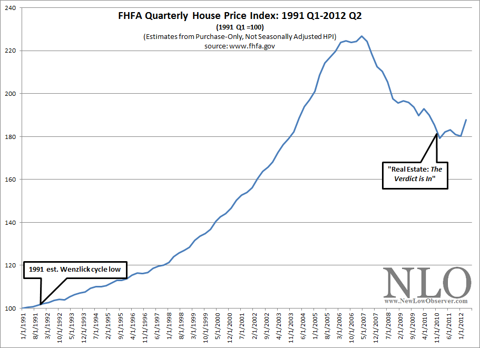 The real estate cycle that Roy Wenzlick adheres to pointed to a low in 1991 and a low in late 2009. In the Federal Housing Finance Agency's House Price Index for the nation, we can seen that 2009 was not quite the end of the decline for real estate. Knowing that all cycle analysis is a rough estimate, at best, we hedged our view to include the possibility that the bottom would occur as late as the end of 2010.
Posted by Greg Flowers at 8:48 PM